The other day I commented that I don’t consider items that feature either Dale Earnhardt or Elvis to be art.  That reminded me of Dad’s buddy who used to own the Certified station in Marion.  This guy lived alone, but for a dude he had a rather bizarre decor.  Most of Dad’s single male friends’  homes  were decorated in the “Late 70’s Flea Market Meets Soft Porn” mode.  Many automotive supply companies (since they were marketing to almost exclusively men back then) gave out free nudie calendars and posters.  These freebie nudies made perfect wall hangings for these guys, and they also doubled to cover up the holes in the walls from their drunk and stupid adventures with dart games, beer bottle tossing, or target practice with the BB gun gone terribly awry.  But this guy was different.  His house was spotlessly clean and by some unnatural miracle of nature, it was actually color coordinated.  The fact that it didn’t smell like a barroom and there was a strange absence of filled up ashtrays, beer cans all over the floor, and various filth and detritus everywhere as is found in a typical man-cave, did not mean this place was in any way aesthetically pleasing.

Elvis was pictured on almost every item in his house- including the toilet seat.  The only difference between the one pictured above and Dad’s buddy’s Elvis toilet seat is that his Elvis was surrounded with powder blue instead of powder pink. 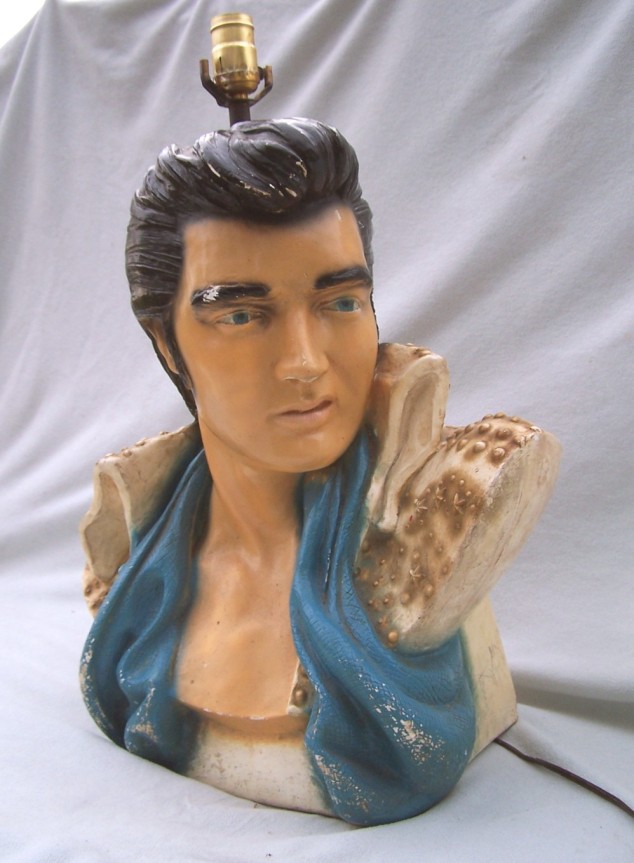 If only I’d had a camera with me (photography was not nearly as quick and easy before the days of the digital camera and the USB cable) the pictures could have said it all.  Deep blue shag carpet in every room (including the kitchen!)  Elvis decals affixed to each of the kitchen cabinet doors and to the front of the fridge.  All the clocks had Elvis on them.  The pillows and throws on the couch had Elvis on them.  His drinking glasses and coffee mugs had Elvis on them. This place could have been confused with the Church of the High Holy Elvis- and it probably had more badly made, tawdry Elvis kitsch in it than Graceland.  Elvis was the King in this joint, alright- King of the potholders, the crapper, the Kleenex cover on the toilet tank, the lamps and the curtains, ad nauseam.  My retinas were so traumatized that I can never view an object with Elvis on it without either laughing my ass off or wanting to retch.

I had to speculate that perhaps this guy inherited the house with all the Elvis junk. I thought perhaps it was his Mom’s, and then maybe his Mom died and he just left the place the way she left it.  But I soon learned that his Mom lived a few houses down and (though I never got the opportunity to peruse it) legend had it that she had even more Elvis crud in her house.  Then I thought perhaps the Elvis decor was the doing of an ex-wife or ex-girlfriend, but his girlfriend had been in prison in Arizona for the past four years.  So this guy was decorating his home in this bizarre fashion on purpose.

Maybe I’m being  a bit critical, but I don’t think I can afford to be a big enough fan of anything to decorate my entire house with it.  Maybe when I am old and live alone I can get away with painting every room pink and filling my home with as much Hello Kitty kitsch as I can possibly find.  My friends (the few I have) know how weird I am so it won’t matter.  But I am not a big fan of all the home improvement type stuff.  If it doesn’t need replacing or painting, etc. I am not going to replace stuff just to replace it.

One thing I did observe yesterday that I thought was kind of cool was as I drove by the beauty academy I saw one of the girls leaving with what looked like one of those Barbie makeover heads you used to be able to buy for little girls so they could learn to put makeup on them and do their hair.  “Angelica” (my sadistic oldest sister) had one of these.  I inherited it from the dog when she (the dog) was done with it, but the dog’s attempts at beautification left Barbie Head snatched nearly bald and rather toothmarked. 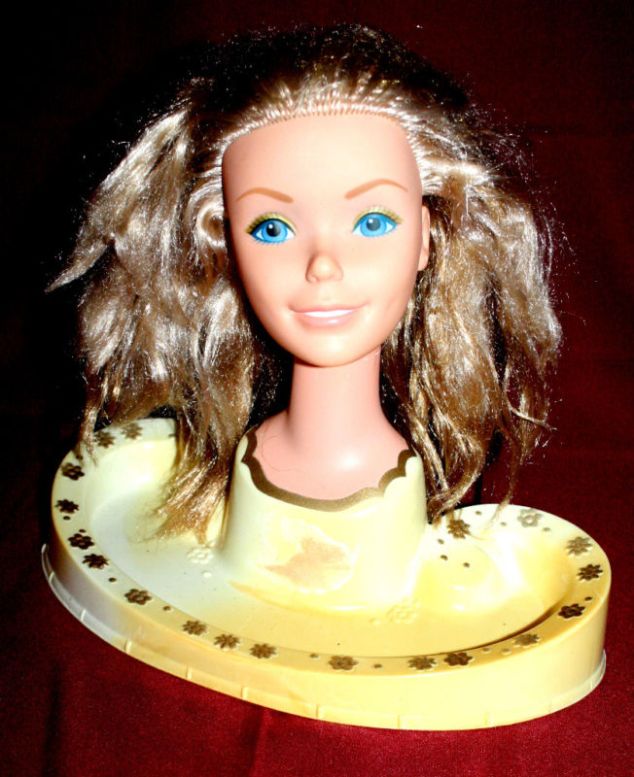 Anyway, for a split second I thought I’d like to have one of these, only with short black hair and a pale white complexion, so I can experiment with makeup before I actually try it on my own face.  Then I realized that it would just be easier to cut out the middleman.  I only wear makeup to keep people from trying to bury me anyway.

Ironically my poor Aunt Ellen never wore makeup until she was dead.

The whole business of dolling up a deceased loved one for the viewing reminds me of my poor Aunt Ellen.  She was my great-grandmother’s sister, and was 84 when she died back in the late ’80’s.  Unlike my great-grandmother, she was one of those very conservative old ladies who belonged to one of those Pentecostal churches that forbade women to wear makeup or even to wear pants. I think when funeral people dolled her up for the Final Ride, either death had not done her appearance any favors, and/or they really got confused.  Her face was so heavily orangey-pancaked and rouged that it looked as if they were making her up to look like one of the Oompa-Loompas in Charlie and the Chocolate Factory.

To make it even worse, they put some sort of orange day-glo lipstick on her that I swear was so bright it would have fluoresced if someone would have turned on a black lite. (This was a woman who never even wore lipstick until she was dead!)  And she was decked out in one of those Horrible Pink Nighties that funeral homes typically put on old women- the ones that look like someone’s prom dress gone seriously wrong, to boot.  I’m just glad they didn’t try to dye her hair green.

The icing on the cake (and as potentially disrespectful as it was, I could barely keep from explosive laughter by this time) was when my remaining elderly relatives filed by the coffin and remarked, “Doesn’t Ellen look goooood?”  All I could think was – “Have you guys been to LensCrafters lately?”  Ellen looks pretty dead to me!

I’m thinking at best, Ellen looked like an escapee from the Oompa-Loompa Prom, but what do I know?  There’s only so much that mortuary science can do.

That’s one of the reasons why I want to be cremated.  I don’t want anyone filing past my coffin and commenting, “She looks better dead.”

One thought on “Am I the Only One Who Notices? and Final Send Off Faux Pas”