Perhaps old Fred got the real point in the end.

In a twist of cosmic irony, Fred Phelps was actually excommunicated from the infamous Westboro Baptist Church that he founded, so maybe there is hope for him after all.

I don’t wish damnation on anyone- even Obama (although I hope that  in some way he pays for all the pain he’s inflicted on millions of Americans)- believe that or not.  But other people’s salvation or damnation is far beyond my judgment and well outside my sphere.  I think Clint Eastwood (in Heartbreak Ridge? – it’s been awhile since I’ve watched any Eastwood flicks)  put it as, “Kill ’em all and let God sort them out.”  God’s going to sort them out anyway, so I’m not making that my business. 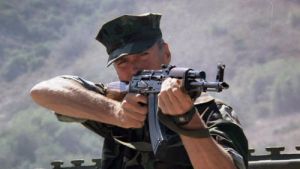 I enjoy the creativity behind the use of acronyms and certain logistical metaphors used in certain industries.  Medicine is particularly macabre– even more so than automotive.   I can say I probably have :

I freely admit to those.

However, there’s a lot more other goodies on this list:

FUBAR – Fucked up beyond all repair/recognition

SHA – Ship His Ass (when patients refuse to be discharged).

TTOAST – Take Them Out and Shoot Them

Automotive people are almost always vindictive and snarky by nature, but we usually don’t get into gross.   We don’t deal with death (usually, though I have seen some totaled cars in body shop lots that people have died in that had skin and hair and guts and blood everywhere) every day.  Another plus is we seldom have to deal with bodily effluvia or offensive odors.  I don’t think I could handle body odor and shit and puke on a daily basis.

The times when we do get to see gory, gross or just plain bizarre stuff, are quite memorable.  The (new off the showroom floor at the time) ’89 Caprice that flashpointed with only 125 miles on it was pretty cool.  This was what I got to see the second day I worked in a dealership.  It was a completely charbroiled wanna-be cop car.  The owner smelled something funky, got out, and as soon as he shut the driver’s side door, it went down in a blaze of glory.

For those who don’t know what flashpoint is, it’s sort of a combination of a fire and an explosion all at one time.  Usually there is an accelerant involved (i.e. gasoline) and the fire is hot and heavy, but it doesn’t last long.  Older, carbureted cars like that Caprice were more prone to it, but even then it was rare.  The dude obviously got a lucky break.  He had a second to get out of the car.  I don’t know why I think of flashpoint when I hear of (alleged?) spontaneous human combustion.  Cars have lots of places where sparks can occur, as well as plenty of accelerant in the fuel system.  Internal combustion itself is simply a series of contained, controlled explosions. (How do you think that crankshaft turns?)  I’m surprised that more cars don’t catch on fire and/or explode- but I’ve been trained and conditioned to look for what can go wrong with automotive systems.   I’ve witnessed many bizarre automotive failures over the years- but I’ve only personally seen one flashpoint, and then only after the fact.

I think it would be a lot harder for something that’s 70% water to catch fire, (i.e. a human body) especially without any overwhelming presence of accelerants.  Some people argue that the body does produce acetone- which is flammable- but I would argue, not in sufficient enough quantity to sustain any kind of burn.

This guy, though, seemed to have sizzled everything but the loafers. 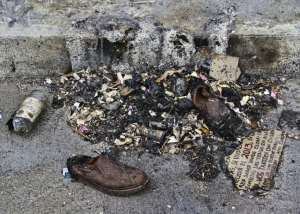 You could almost still wear the loafers.

The only thing is, was there really a dude in the pile before it ignited (I’m assuming a dude, because no self respecting woman would wear brown dude’s loafers) or was it just a pile of newspapers, a broken wine bottle, and an old pair of loafers to begin with?