I had to take poor Miz Izz to the vet on Saturday.  I did so with a bit of trepidation, because when a cat’s 15, anything can be the prelude to the dirt nap.  She has a funky condition on the pads of her front paws called plasma cell pododermatitis or what is commonly called “pillow foot.”  The paw pads swell up and sometimes even crack and bleed (this was the reason I took her to the vet.) Weirdly enough, it’s not a particularly dangerous condition, but given Miz Izz’s age, it can’t be surgically corrected.  The risk of surgery on a 5#, elderly cat is not worth the potential benefit, because it’s neither painful nor life threatening according to the vet.  It can be managed with occasional steroid/antibiotic injections and scuttlebutt has it that essential oils and Vitamin E can be helpful as well.  So she’s back on the fish oil and Vitamin E supplement which I probably should not have stopped giving her.  It does make her coat nice and shiny, and she doesn’t object to the taste, so if anything I don’t see where it would do any harm.

Most cats go ballistic in the car and have meltdowns in the vet’s office.  Not Miz Izz.  She will sit on the exam table quietly and let the vet do her thing.  Isabel was cooperative even when she was very young.  I can just zip her up in my hoodie and carry her around with no problem.  Jezebel also lets me just put her in my hoodie, and is just as laid back about the vet and riding in the car as Isabel is.  Fanny freaks out.  She is well near impossible to transport and has to be in a carrier.  I’ve not had to attempt transport with F.B.   F.B. is usually quite sanguine, but she does put up a wicked struggle over getting her flea treatment. 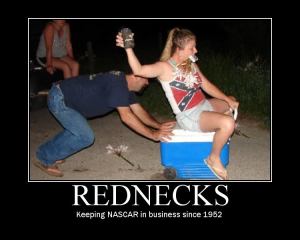 Some people are very easily entertained.

The photo above is further evidence of the devolution of mankind.  Fifty years ago these people’s grandparents would have been engaging in the fine pastime of ballroom dancing:

All I can think of is how bad those skirts have got to ITCH!

Every time I go to WalMart, I am reminded of how badly the gene pool needs chlorine.  Either that, or it might help to provide more full-length mirrors in public places so people can see how bloody ridiculous they look.  When your ass is the size of a Toyota Corolla, Spandex pants and a halter top are not sensible wardrobe choices.

It also doesn’t help to try to put camo pants over rhinoceros size butt cheeks.  The camo effect is lost when you’re working with that much surface area.

I ended up having to go home this afternoon with a nasty sore throat.  Yes, I went and had a strep test because it came on rather suddenly (the preliminary test was negative) so I am in bed swilling tea and wishing Jerry would shut up about not being able to find anything in the kitchen.  I’m not fetching anything for him.  I’m trying to get this shit to go away because I really don’t want to call off work tomorrow.  I have the vacation time, and the thought of a whole day of drinking tea and watching History Channel could be interesting, but I really hate taking days off (especially unplanned) because I end up having to fix nine kinds of disasters when I get back.