I’ve been a sort-of fan of impressionist art. I can appreciate Van Gogh and Monet, but then I can also appreciate cats playing poker. I certainly wouldn’t call myself an art snob.  My tastes in art are varied and eclectic for what it’s worth.

About the only “art” I draw the line on involves the use of bodily effluvia (snot, poo, pee, etc. are not artistic, sorry) and/or the portrayal of Elvis and/or Dale Earnhardt. 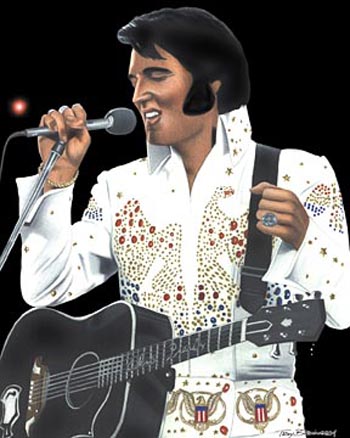 It seems that Jerry must have mistaken himself for Van Gogh last night.  He made another poor decision to go the hell hole to get hammered (what’s so unusual about that?) and managed to inflict bodily injury on himself (again.)  This time it was his ear lobe.  He didn’t come close to actually ripping it off but he fell into something and managed to get about  a 1/2″ cut in it.  It’s not a life threatening cut, and it’s not even in a place that can be stitched, but every time he so much as brushed against it this morning it would bleed.  The pillowcase looks like Freddy Krueger had actually gotten to him in his sleep from the amount of bloodstains on it.  Remember what they said about not going to sleep or Freddy will get you? (Man, I loved the 80’s slasher flicks back in the day…just couldn’t get enough of that slashtastic action.)

I should have really freaked him out with that observation, but I was busy enough trying to get him to let me put a band-aid on it or something.  One would  have thought from the drama that Freddy really did come in and slash him last night.

I put a little note in his lunch for the guys to read.  Today’s should be very funny.

Please be extra nice to Jerry today.  Last night he was so confused and distraught he mistook himself for Vincent Van Gogh and tried to cut his ear off.  Should it actually fall off, please take him to the ER so it can be reattached.  Thank you for your patience and understanding.

I thought it was weird when I had to leave messages with Steve-o’s sitter such as:

Please do not allow Stephan to eat all five boxes of Pop-Tarts I sent in one day.  He is permitted one package of two Pop-Tarts per day.  Thanks!  (This was actually a note to my mother, who for some reason thought it was OK to let a six year old free-forage in the kitchen.)

Please do not allow Stephan to eat more than two (2) Fig Newtons with any given meal.  Figs give him Montezuma’s Revenge.

Please do not allow Stephan to chew on your dog’s toys unless you sanitize them.  I wouldn’t want your dog getting any diseases.

Of course, I still think that my request directly to Steve-o to just put the dirty pants in the wash without sniffing the crotch as a “freshness” test, takes the prize.   I never imagined I would ever have to say this to a 17 year old.

I’ve had to request some strange things in my lifetime, but I’m used to it.  Not too many things shock me anymore.

I’m sure I’ll think of some though.

2 thoughts on “Please, Reattach Body Parts Should They Fall Off, and Other Things I Should Never Have to Request”