I finally decided (Thursday) to call my Dr.s office about my heart palpitations and other funkiness and I got the answer that I pretty much assumed I would get.

Yay.  But I did follow instructions, mostly because I knew they weren’t just going to set me up to see a cardiologist in a week or two.  They wanted me to get that cardiac workup one way or another that I’d been denying I needed to get and that I’d put off for a few years.

The plus side of the fun 5 mile ride in the squad was the view.  Hate to admit it, but the one paramedic was maybe early 30s or so, and very easy on the eyes.  Shame on me for noticing, but I’m not dead yet.  Maybe I should have just told them that since I could still ascertain that the one guy was rather hot even while he’s putting electrodes all over me and getting an IV started in my arm, that it would be cool to just let me out.  However, I don’t think they would be allowed to just drop me off somewhere along I270, no matter how awkward it was that I was thinking some rather randy thoughts. 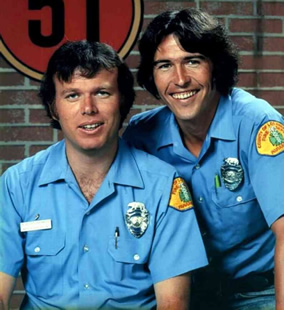 Yes, I watched the Emergency! TV reruns all through the 80s.  They were hot, except for the 80’s hair, which was considered hot then too.

When I get to the hospital (which was the one hospital where I really didn’t want to go, but they have to take you to the closest one that has room) then I get put in one of those exam rooms and get questioned as to what’s been going on and how long, etc.  Another interesting aside- in the ER all the nurses and techs I encountered were young men.  How distracting, but I’m not complaining.  I feel sorry for them for being forced to have to view my old saggy chest to wire me up.  I’m sure they’ve seen worse and they’re not there for the view, but still.

What was really scary (and why I wanted to go to a different hospital, because this one is notorious for its poor record keeping) was that as I was being put in the ER bay one of the techs looks at the computer and says, “Hi, Mildred, how’s your diarrhea?” 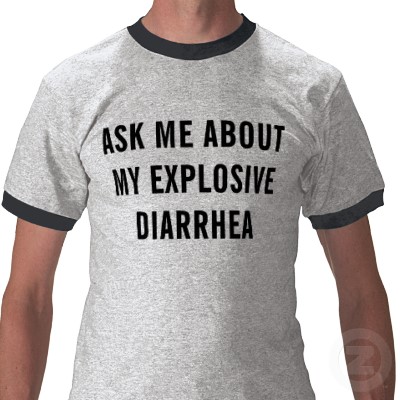 Dahlink, I thought you would never ask!

Mildred, apparently was the woman who was just being released from that room before I was assigned to it.  I heard the physician assistant almost screaming at this poor lady who must have been at least 95, to drink lots of water and have her son stop at the CVS to get her some Imodium, before they wheeled her out.  I looked over and asked the guy if I looked like a “Mildred,” to which I got a sort of puzzled look, then he asked me my name and what they brought me in for.  I didn’t bother to tell him that “Mildred” was old enough to be my grandmother, and I know full well what to do about the shits without going to the ER, but when you’re as old as that lady was even a good case of the shits can kill you.

So I sit and stew for about half an hour, when Jerry finally showed up (doing God knows what with my car) and, after a few phone calls and not a little bit of under the breath profanity, the nurses were finally able to find my information in the computer.  They were fortunate enough to catch some of the palpitation incidents on the monitor, which was enough for the physician assistant (who was the only woman I saw working in the ER) to decide to confer with her boss about admitting me for the night.   Just don’t call me Mildred or ask me about my diarrhea and we will get along OK.

In the meanwhile I’m just lying back on the cot while they wait to put me in a room.  Then another squad brings a lady in from a nursing home who won’t stop screaming.  After awhile they wheel her off and it gets a bit quiet.  Then the transport guy shows up to take me upstairs.  I’d been under the impression I’d end up in one of the cardiac observation rooms which are private, but all those rooms were full, so I end up sharing a room with the howler monkey from the ER.   Wonderful.  To make it worse from the time the squad brought me in- 3:30- until I landed in the room- 10:30- I’d had absolutely nothing to eat.  One of the aides was kind enough to dig me up a sandwich, and the nurse was finally able to find and give me my evening meds so I thought I could go to sleep. 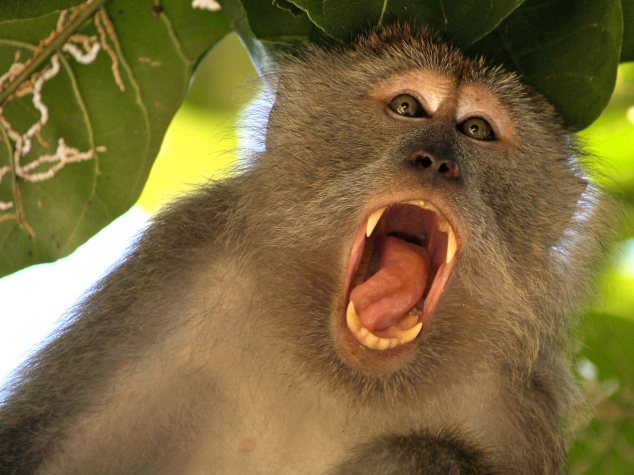 Then Howler Monkey Woman’s sedation must have worn off because she kept setting off the bed alarm, and crapping the bed, so that the nurses and aides were over there hosing her down half the night.  The plus side of this is at least I had the toilet all to myself.  I might have slept an hour or two but I doubt it.

Yesterday morning (Friday) I finally got to talk to the cardiologist, who decided to do both a stress test and an echocardiogram to rule out any really serious stuff since I’d not had a heart attack but I wasn’t exactly “normal” either.  Suffice to say that the chemical stress test is not a pleasant experience and neither is the sort of reverse rotisserie machine they take pictures of you with. I was so glad to get out of there last night I immediately took a shower and went to bed.  It’s better to be home.

The conclusion so far?  I got referred to a pulmonologist for a sleep study as the cardiologist seems to think that my irregular heart rhythm and palpitations are caused by sleep apnea.

To me it sounds like 2001 all over again.  At least I’m not dead yet.  But I already know I don’t sleep for shit.  What I didn’t know is that not sleeping for shit can eventually kill you, which is sort of sad in a way.

7 thoughts on “2001 Redux, Things I Do Not Wish to Repeat, the Good, the Bad and the Indifferent”