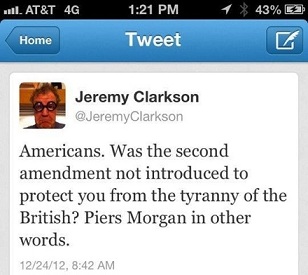 I’m an American.  Unlike the current squatter in our White House, not only do I understand the purpose of the Second Amendment, I can prove that I was born in this country, and I can even prove my parents and grandparents were too.

Even though I’m American, I enjoy British humor.  I also enjoy European cars, even though I can’t afford them, and even though I drive a Toyota for the low cost and reliability.

So when Steve-o turned me on to Top Gear on BBC America, I was fascinated.  The premise of the show is simple: three middle-aged, irreverent Brits (Jeremy Clarkson, Richard Hammond and James May) driving and critiquing cars that I never knew existed.  They combined British humor with European cars, and now I’m finding myself DVRing it for later when I can’t stay up all night to watch it. For those who have never viewed the Brit Top Gear, the best way to describe it is, Benny Hill meets the automotive fancy!

I have to love a guy who thinks Piers Morgan is a knob, AND digs the old VW GTIs as much as I do.

I do find it hard to believe that a guy who is 6’5″ can fit in an old GTI, much less drive one, but wonders never cease.

They have good taste in cars, even for guys who drive cars with the steering wheels on the wrong side.  I would think it rather awkward to shift with my left hand, but I guess it would be normal if you’re used to it.

The BBC doesn’t let the Top Gear guys have sponsors, so they make up their own. 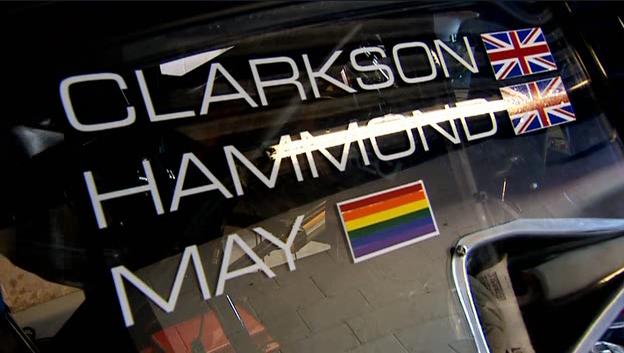 They aren’t politically correct, either.

I don’t think James May is gay.  I think they are acting like adolescent boys who call each other “gay” in an attempt to slam the other guy’s masculinity.  They may be middle-aged men, but like all men, they are pubescent boys at heart.  I think the pranking is funny, but I’ve always gravitated toward puerile and sophomoric humor.  I still find Benny Hill hilarious.

I don’t know why, but Benny Hill was even funnier in drag.

Now that Top Gear is on BBC almost every day, I have something fun to watch when World’s Dumbest isn’t on.

Jezebel (at 6 1/2 months) is still smaller than Isabel.

Jezebel came home last night, clawless and a bit disoriented, but OK.  She’s more energetic and looked a lot better than I had anticipated,  but I still have to keep her isolated and away from the dogs and the basement (where the regular cat boxes, plus various other basement funk is.)  Apparently she is simply meant to be a very petite cat (she is about 3#, but she is well proportioned)  which should not affect her overall health.  I do wonder if she was born a runt- the other three kittens we trapped at the same time (may or may not have been siblings) also still had blue eyes and appeared to be about the same age, (under seven weeks) but they were markedly larger.  Most of the ferals in our area are small cats, (even the toms) so I really didn’t expect Jezebel to be of Fanny-sized (aka:epic) proportions.  Isabel has always been right around 5# all of her adult life and her small size doesn’t seem to faze her in the least.

I think that we could make an interesting Anglo-American exchange (even though both guys involved are Brits.)  We’ll send Piers Morgan back to England, because there’s more of an audience for his politically correct whining in the UK,  but only if we can have Jeremy Clarkson. Jeremy makes sense.

If all foreigners were like Jeremy, I would be a huge advocate for immigration!

I mean, really.  He speaks English*, is gainfully employed, and has intelligent opinions- unlike the terrorists and non-English speaking third world refugee Obama-lovers who are bombarding our borders.  Just a thought.

(*some people consider British English and American English to be two separate languages- which may be true if you consider some Southern dialects to be representative of American English- however, most of us can understand most of what they say and vice versa, so close enough!)