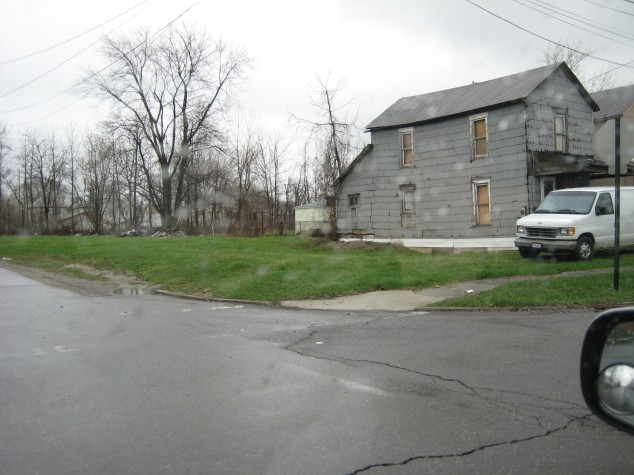 Castles made of sand slip to the sea, but ill-maintained redneck houses are reclaimed by the swamp.   Entropy in action!  I think these guys thought they were going to put in a pool right next to the house.  It’s hard to see from this angle, but they dug a giant hole right next to the house for some mysterious reason.  Then the whole house started caving in and they filled in the hole again.   I’ll bet there’s not a level floor in that place, no running water, and there’s a roach colony of millions, but the satellite and big screen are working just fine.  Until the house falls in on the plasma TV, that is.  Central Ohio is all one big drained swamp.  Compromise your foundation at your peril.

I am one of those people who is all about practical application.  I seldom read fiction for that reason. I like a good story, but is it true?  Is there a practical lesson in it, or is there at least something funny, gross or macabre in it?  When I was much younger and had a lot more time on my hands, I read almost everything I could get my hands on- bodice rippers, porn-without-the-pictures, mystery-especially Agatha Christie, most of Stephen King’s novels, most of Tolkien’s works, but even then the bulk of my reading material consisted of my usual standards- scientific and historical non-fiction.

Sadly I’ve not read a fictional novel in years.  I really should broaden my horizons, and I would if I had more time for recreational reading.

I do read the Bible.  I really understand what the Teacher of Ecclesiastes was talking about.  Sometimes life seems futile and pointless and I feel like Sisyphus – I have to roll the boulder up the mountain every day only to wake up the next day and do the same pointless tasks over and over.  There truly is no satisfaction under the sun.  I get frustrated, lonely, tired and broke- and for what?  The only hope that there is purpose in life lies in the realization that it’s God’s plan and that there is a deeper meaning to life than just endless repetition and monotonous drudgery.  Sometimes it’s just really hard to see. 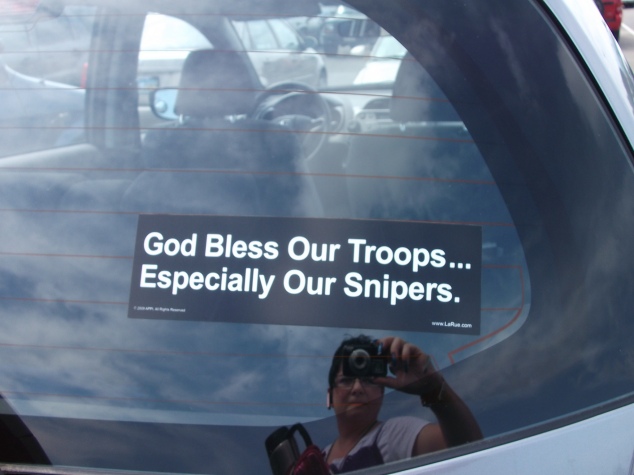 I couldn’t resist taking a pic of this bumper sticker, even though I managed to get my own reflection in the pic.  I have to amuse myself somehow.

On a much brighter note, the Journey show last Friday was beyond awesome.  I am a huge Journey fan and would love nothing more than to send myself back 30 years to be backstage with Steve Perry- believe that- but I am also a realist.  It’s not 1981.  Steve Perry is of the over 60 crowd, hip replacement and all.  As much as I would love to see him, and hear The Voice live, I don’t think he is physically able to tour and endure all that.  Arnel Pineda is worth seeing and hearing in his own right, and I don’t think I have ever heard Neal Schon or Jonathan Cain play better.  Journey 2011 is still very, very good.  I absolutely loved “Edge of the Moment,” which is one of the new songs from Eclipse.  I only wish they would have had time to play “Resonate” from Eclipse also, but if they would have played everything I would have wanted to hear they’d been playing all night and that’s simply not feasible- especially considering these guys are getting up in years.  Pity.

I only encountered two people who understood the t-shirt I wore to the show that says, “Neal Schon Afro Society” and has a pic of Neal from about 1977 with that ridiculous poofy ‘fro he had back then. (see the cover of Next to see what I mean- Neal is the one on the left)   But today I understand very well that a 56 year old guy with black hair is going to be coloring his hair, and the less hair one has the easier it is to keep it all one color.   Besides, a 23 year old guy looks dorky with a ‘fro like that.  A guy more than twice that age would look like Flippo the Clown with a ‘fro like that.  The ’70’s- I must say the hair and clothes were bad- but the music (grandiose, funky, fusion based rock, anyway) was good.

The nice part about this show was that everything was worth watching.  At no time did I feel compelled to make a run for snackies or to go to the john out of boredom!  Night Ranger was excellent- I particularly enjoyed Deen Castronuevo coming out to play drums during “Sister Christian.”  They also did a most wonderful rendition of Damn Yankees’ “High Enough”- even without Ted Nugent.  Foreigner was impressive as well- especially “Dirty White Boy” and “Jukebox Hero.”

You can’t turn back time, but you can learn to enjoy the moment for what it is.  I know some people might have been disappointed because they expected to see everything exactly as it was in the Big 80’s.  In some ways it was all that and more- perhaps with some different faces or arrangements or a few new twists, but who or what can remain the same forever?  Entropy, my friends- everything is moving ever closer to disorder and chaos. My boobs are heading a bit further south every day.  That’s a lovely thought.  Pink Floyd- in rather macabre Brit fashion- in the song “Time,”  put it as,  “one day closer to death.”  Might as well tell it like it is.  As for me, it was most therapeutic for once to simply sit back and enjoy the show.  Next time- if there is a next time- I really want to spring for the VIP tickets and perhaps get seats close enough to take reasonably visible pics.  You can almost see Neal in the big screen in this one. 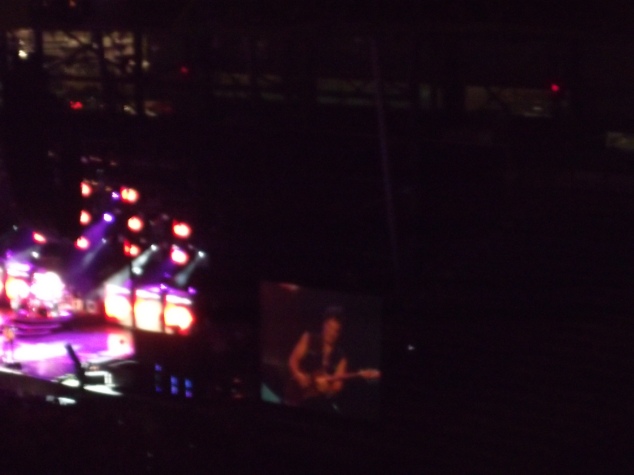 The common wisdom about aging is that everything gets bigger, hairier and closer to the ground.  Except the tops of men’s heads, that is.  The tops of their heads might get bigger and closer to the ground, but the hair migrates to their ears.  No wonder I wondered for a moment what my Dad’s friends were doing at my class reunion, until I realized they were the guys I graduated with, and not the geezers Dad hangs out with.  Creepy.