This is an interesting concept.

I can see it now.  This could be the cover of a beefcake (as in nude dudes) calendar with a fishing and hunting motif.   The sign is from a local construction site where they are building a Field and Stream store as well as a Dick’s Sporting Goods.  (Yes, for the sports non-enthusiast,  Dick’s Sporting Goods is a real chain of stores.)  This sign just struck me funny in a puerile, sophomoric way.  It’s bad that I still enjoy toilet humor at my age, but some things are just funny, and it doesn’t matter if you’re 8 or 80.

Today’s trendy habit of photographing every bloody thing under the sun (and I am oh, so guilty of doing it too) provides vast quantities of comedic fodder.  The horrible pics of moonbats in Walmart are proof of that.

It just seems incongruent that in these times where everyone has a camera (usually part of the phone) and can take pictures anywhere, that people go out in public looking like something left over from an 80’s slasher flick or an unfortunate survivor of an explosion in a thrift store.  Just because you can go out wearing a halter top, SpongeBob boxers for pants, and you can dye your hair Ronald McDonald red, doesn’t mean you should.

Back in the 1940’s, for example (one of my favorite fashion eras) photography was expensive, and taking pics of people wasn’t a particularly easy endeavor.   It was unlikely that someone would take a random pic of you, and even more unlikely that your pic would appear on screen or in print, ever.  Even so, people dressed a bit more appropriately out in public.  There are no pictures from the 40’s of anyone out in public with underwear showing above belts or pant waists in the middle (or the bottom) of the butt crack.

Women didn’t go running around outside with their back boobs showing either.  It’s no crime to be large, but if you are, dress appropriately.  No one wants to see that.

(Not sure if this is a woman, but you get my drift.)

We have become a nation of freaky moonbats.  It started in the 1960’s when people started doing acid and other hallucinogens, and it’s getting progressively worse.  Maybe I’m noticing this because my parents pretty much opted out of the whole ’60’s counter culture scene except for the thing for Volkswagens.  I know more about old air-cooled Volkswagens than anyone probably should, but as far as I know, my parents are tee-totalers who only take drugs they have scripts for.

Saturday we’re going to the Ohio State Fair, which among other things, is a Walmart-caliber freak show.  I’m going to try to sneak off some pictures as long as I can do it discretely.  Last year didn’t disappoint.  The Popcorn Festival in Marion is the world-wide showplace of Very Bad Tats (this is coming up in September) and I will have to try to sneak some pics of those too.   The Festival is not an easy place to get pics, as it’s crowded, but the Bad Tat Bazaar (or should I say Bizarre) will be interesting.

I shouldn’t say anything about tats (I do have a small but tasteful rendition of Théophile Steinlen’s Chat Noir on my right calf) but there’s tasteful, artistic tats: 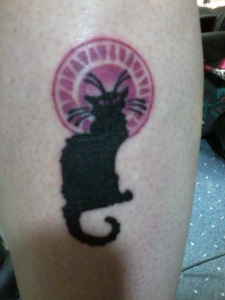 And then there’s tacky, drunk-and-stupid ones:

I did- or I should say Steve-o, aka Mr. Borderline OCD did- some research before we did the whole tat thing.  He was diligent in finding a facility whose standards exceed the county health department’s for cleanliness and sanitation, and whose artists are truly artists.  Getting the Chat Noir applied was a surprisingly pleasant experience over all, and going to a reputable facility was much preferred over getting drunk and giving some recently-released-from-prison bubba with a modified Walkman motor full of hepatitis A, B and C a $20 to scribble permanent scribblings into my skin.  My best friend in high school did that, and she probably still has that particular ex-boyfriend’s name in three inch block letters on her back.  I don’t know if she got hepatitis or not from that jailhouse tat, but it wouldn’t surprise me.