I knew it would happen eventually.  I hoped for more time, not so much for me, but for the illustrious POMC to finish school and to already be gainfully employed and independent from the parental units before informing me that I am soon to be a grandmother.  Really.

I also hoped that he would be married to the baby mama at that point too, but at least he didn’t fertilize either Jezebel or Psycho Chick (his two previous girlfriends) and he’s been in a fairly stable relationship with the baby mama.

Marriage and employment aside, this potential train wreck could be a lot worse.

I can’t say that I’m angry.  I’m not angry.  I’ve been there.  Steve-o wasn’t planned either.  Life happens and life is messy with all the details and you have to work your way through.  Having a child at age 20 (and she’s 18 for heaven’s sake) is no easy endeavor.  Far be it from me to add fuel to the fire and make a hard situation even more difficult.  Hearing my critique and commentary isn’t going to make anything better. No sense in shutting the barn door once the horse is already out.  Steve-o at least wants to be a man and be a dad to his child- and I will do whatever I can to back him up with that.  He’s seen too many of his friends in situations where their babies’ mothers don’t want them around and one thing Steve-o does want is for his kid to have a mom and a dad and for him to actively participate in his family’s life.  I hope he means what he says, and I think he does.  After all, his sperm donor wasn’t particularly interested in him.  He knows what it’s like.  The thought of his own child having a dad who doesn’t care is particularly repulsive to him- as it should be.

Dad is pissed.  Dad will be pissed for a few more days until he finally realizes the futility of attempting to shut the barn door and then he will come around.  His desire to see and have contact with his first great-grandchild will win out.   I do think the whole parenting dimension will make it more challenging for Steve-o to finish school and make something of himself, but it will no means be impossible.  Steve-o does have an incredible talent for doing what he needs to do when he really wants to do it.  Will he care enough about his offspring to do so?  Only time will tell, but he certainly doesn’t need my cynicism and despondency to get in his way.

I was sort of surprised at Mom’s reaction.  She wasn’t thrilled, but she wasn’t nearly as pissy as Dad.   I know she’s pissed at Steve-o for not keeping his business in his pants, but I don’t think she’s completely disappointed at the prospect of a new baby.  Life is life and things happen for a reason.  Some people try and try to conceive and can’t- or some people, like me, could only have one child. 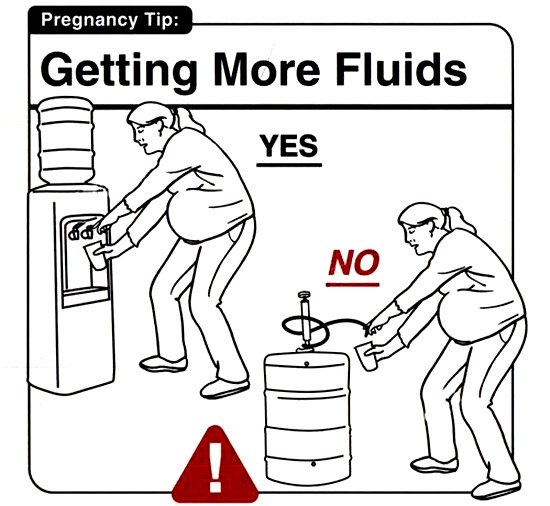 Of course, in my elderly cougardom the only thing keeping me from rehydration via party keg is that alcohol wreaks havoc with my blood sugar and with my blood pressure meds.  I am thankful in a dark sort of way that I am not going to have to endure all the pregnancy discomforts- a sort of  “better thee than me” scenario.  I already have vintage stretch marks and a lovely c-section scar (recently accompanied by its parallel hysterectomy scar)  that haven’t gone anywhere in 20+ years.  Even if I still had the necessary equipment I am way too old for that noise.  I am going to refrain from sharing the Murphy’s Law as it Pertains to the Childbirth from Hell story with them.  Some things are better left unshared, especially with a very young couple that has just been enlightened as to the existence of a third party.

I’ll have to be the poor sucker out there scouting about for baby clothes and other stuff they’re going to need.  At least I am not the one having to go through the endless succession of prenatal visits, weight gain, having to pee every ten minutes, and of course, the Birth Experience which she is going to want to be heavily medicated for, especially if their baby weighs almost 10# like Steve-o did.  She will want to rip off his nuts.

Lord have mercy.  They are going to need it.